The West African Manatee (Trichechus senegalensis) is a species of manatee and is the least studied of the four species of sirenians.

African Manatees are found in coastal marine and estuarine habitats and in fresh water river systems along the west coast of Africa. 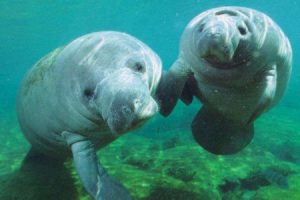 African Manatees can be found from the Senegal River south to the Kwanza River in Angola, including in Gambia, Liberia, Guinea-Bissau, Guinea, Sierra Leone, Côte d’Ivoire, Ghana, Mali, Nigeria, Cameroon, Gabon, Republic and Democratic Republics of the Congo.

Although crocodiles and sharks occasionally kill manatees in Africa, the African Manatees only significant threats are from humankind, such as poaching, habitat loss and other environmental impacts

.Hunting is traditional in numerous communities and represents the main threat to manatees, notably in areas of Avicenia mangroves. The presence of manatee traps has been observed in such areas.

In the Gambia, West African Manatee numbers are thought to have declined, but as of 1993 the manatee was still numerous in the River Gambia.

Manatees have been fully protected for many years but in the 1980s were still hunted extensively. There is little recent information about the extent of manatee hunting in The Gambia, but at the beginning of the 1990’s, the population had considerably decreased due to hunting.

Manatees are also affected by the destruction of their habitat due to deforestation of mangroves and their still frequent accidental capture in fishing nets, especially in the Massarinho Bolon. The low reproductive capacities of the manatee reduce further its chances of survival when faced with these various threats.

The West African manatee feeds primarily on vegetation.  It is dependent on emergent or overhanging, rather than submerged, vegetation. Populations in some rivers depend heavily on overhanging bank growth and those in estuarine areas feed exclusively on mangroves.

In Sierra Leone,  manatees supposedly remove fish from nets and consume rice in such quantities that they are considered to be pests.

In Senegal and Gambia, shell remains of mollusks have also been found in their stomachs.